"No one can love the country as much as I do.
​For surely woods, trees, and rocks produce the echo which man desires to hear.  Nature is a glorious school for the heart."

Thank you for contacting us!

"Blessed is he who has overcome all passions and then proceeds energetically to perform his duties under all circumstances careless of success!"

"I shall seize Fate by the throat;

it shall certainly not bend and crush me completely."

Piano Concerto No. 3, Mvt. 1
​This piece was composed during the same period when he was working on his first two symphonies.  There are parts that make you think of the music of Mozart which was certainly not an accident. Beethoven greatly admired this famous composer and in 1787 had the opportunity to perform and improvise on the piano for him.  Mozart said, "Take note, one day the whole world will be talking about him."  Mozart was right!

A  concerto gives the soloist a chance to show how well he or she plays the instrument.  Beethoven was known for this too when he was younger.  Click HERE to see what that might have been like.  As you watch and listen to the performance below, think about how a soloist is able to express his or her own feelings while playing the music of a composer who boldly expressed emotions in a way that had never been done before.

On November 22 & 23, 2019 the Chicago Symphony Orchestra will present "BOLD Voices: A Beethoven Celebration." You can prepare for the concert by listening to and learning more about the music below.  Come back after the concert too!

"I am not satisfied with the work I have done so far.  From now on I intend to take a new way."

Although Beethoven's third symphony was first performed in 1805, he composed most of it during the summer of  1803. He originally intended to dedicate it to Napoleon Bonaparte who he admired for rising from humble beginnings to being a leader in the French Revolution. When Napoleon declared himself emperor in 1804, Beethoven, disappointed at this tyrannical behavior, changed the title to "Sinfonia Eroica, to celebrate the memory of a great man."

It is significant to know that this symphony was composed just after Beethoven had learned that his increasing deafness was incurable.  As communicating with people became more difficult, expressing his feelings through music grew in importance.  The first movement astounded the Viennese audience by being longer and larger in instrumentation than any other symphonic movement up until then.  The composer continued to surprise them by following this strong statement with a grief filled funeral march which also lasts nearly 18 minutes and leaves us as heartbroken at the end as the beginning.  As you listen, ​think about how you would react to devastating news like Beethoven's.Would you have the courage to heroically continue forward?

"I have never thought of writing for reputation and honor.  What I have in my heart must come out; that is the reason why I compose." 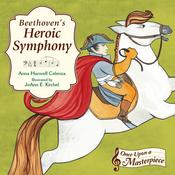 ​​It took Beethoven four years to write this symphony which is arguably the best-known symphony ever composed and played more often than any other.  In addition to its bold depiction of defiance over adversity, the composer again incorporated ideas that were new to listeners of that day.
For the first movement, which is one of the shortest of any of his symphonies,​​ ​Beethoven takes a simple four-note idea and includes it in some variation in almost every measure of the movement.  How many different ways can YOU think of to change this famous motif?  Close your eyes as you listen first to the music alone.   How many different ways used by Beethoven can you list?

Here is a brief child-friendly biography.

The victorious fourth movement of Symphony No. 5 mysteriously sneaks up on us as the third movement transitions straight into it without a pause.  This final movement also includes the piccolo, contrabassoon and trombones for the first time ever in a symphony.  You'll find a listening guide for the excerpt you'll hear at the concert HERE.

"I am resolved to rise superior to every obstacle."

Beethoven's Heroic Symphony  by Anna Celenza shares the true story behind this composition in a child friendly way.

Make Joyful Sound's  All About Beethoven

Make Joyful Sound's Are You Listening?

Symphony No. 9 took Beethoven seven years to write and he left more than 200 musical sketches--a clear illustration of the composer's belief that nothing of significance is accomplished without struggle.   It was again the longest symphony ever written (one third longer than his Eroica) and this time broke the rules again by including voices with the orchestra.

In the second movement, the composer allows the instrumental voices to banter with each other.  His simple rhythmic motifs pass back and forth between the families of instruments and sometimes even between members of the same family as if they are having a conversation.  Listen especially for the bold and brash tympani part.  Could this be Beethoven's reminder to us that we can rise above our difficulties with determination?

"Then let us all do what is right, strive with all our might toward the unattainable, develop as fully as we can the gifts God has given us, and never stop learning.

Beethoven waited to compose his first symphony until he was 30 years old although he'd begun composing 18 years before that!  Symphony No. 1 premiered in 1800 and the composer programmed this piece alongside music by both Haydn and Mozart.  The first two movements of this symphony were what an audience of that time would have expected from Haydn and Mozart. For the third movement, however, Beethoven wrote a scherzo (a lively, playful composition or joke) rather than the usual minuet (a slow, stately dance). It was clear even in his first symphony that this new composer was willing to break the musical rules.

An excerpt of the final movement will be played at the concert.  In it, Beethoven returns to following the rules and brilliantly shows the audience that he learned all that the famous composers of that time could teach him and was ready to boldly go where no other composer had gone before!  Learn a bit about the musical techniques he used for this movement HERE.​​

Once again Beethoven breaks the rules and takes the symphonic form to unknown territory!  In his 6th symphony, which he composed during the same time he was writing his 5th, he creates a piece of program music.  He wrote that his intent was more to express the feelings of being in nature than painting a picture but it is not hard to imagine a story to accompany this music.

​Symphonies at this time had four movements, but the fourth movement of THIS symphony is not the end.  Surprise!  Beethoven has added one more movement than the rules require and in addition he lets this movement interrupt the finish of the third and take us to the final movement without stopping.  If you wanted to compose music that would sound like a thunderstorm, what expressive tools might you use?  To help you hear the tools that Beethoven used, use this listening guide.  As you do so, you can imagine your own story, or let Disney tell you their story by watching this movement from the 1939 movie Fantasia. 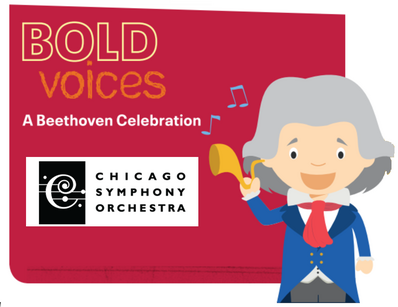 Beethoven's last symphony is explosive with emotion.  It is a testament to his high ideals.  He believed in equality, justice and freedom for all, and most importantly in the power of music to change the world.  In his lifetime, Beethoven had more than his share of fears, frustrations, financial problems and health issues. His lasting gift to us is the ability of his music to help us rise above our daily disappointments to a place where we can truly believe in the universal love and joy of life.  At the concert, the Chicago Symphony Orchestra will play portions of the final movement of this symphony which include Beethoven's well-known melody "Ode to Joy" and the audience will be asked to sing along!  The flash mob video to your left also uses these parts of the movement to share the virtuous message that together through music we can make the world a better place.  How many times do you hear the melody played in this video?

"Recommend virtue to your children; it alone,
​not money, can make them happy."