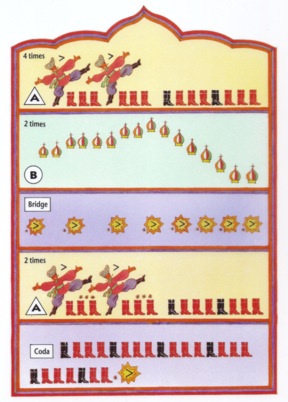 Béla Bartók's
​Game of Pairs from Concerto for Orchestra

Music Director #6, Fritz Reiner, initiated the commission for this piece which has become one of Bartók's most famous.  He composed it while living in the United States.

As you listen and watch, think about which instrument "couple" is your favorite.

Tchaikovsky began working on the music for his Nutcracker ballet in February of 1891 and continued to work on it during his only visit to the United States that spring. A suite of the music was premiered at the CSO just one year later.

See if you can follow the listening guide to the right while you listen to Tchaikovsky's "Russian Dance."

The composer says,“The title, Gazebo Dances, was suggested by the pavilions often seen on village greens in towns throughout the countryside, where public band concerts are given on summer evenings."  Corigliano composed this piece in 1972 when he says the world was a happier place.

This piece was originally written as a piano duet.  Listen to that version and then the composer's own orchestration for orchestra.  Which do you like better?  Why?

Berlioz himself conducted the first CSO performance of this piece in 1896!  It was composed while he was vacationing in Nice, France by the sea.  Can you hear the crashing of the waves against the shore?

Start 5 minutes in to hear the ending which will be performed at the concert.  Do you think this music would be hard to conduct?

Dance of the Sugar Plum Fairy from Nutcracker

The magical sounding instrument you hear is the celeste.  Tchaikovsky was one of the first composers to feature it and he kept it a secret!  Look for it on your left at the concert.

In this video you'll see a scene from the Royal Opera House performance of the Nutcracker ballet.  Why do you think Tchaikovsky chose the celeste for this dance?

In November, the Chicago Symphony Orchestra will present

"The Chicago Symphony Orchestra Sound"--a performance for students and families. You can prepare for the concert by listening to and learning
​a little more about the music before you go!

Rossini composed this piece when he was the most famous composer in the world, aside from Beethoven, and then he retired (at the age of 37)! HERE is a fun idea you might try as you listen to this music.

Play the video to the left to hear this adrenaline pumping piece which will close our concert.

Florence Price's  Juba from Symphony No. 1

Frederick Stock, 2nd music director of the CSO, not only premiered Price’s symphony at an 1893 concert during the World’s Fair, but it was broadcast live on NBC radio. It has been performed by a professional orchestra only a few other times, but the CSO will include it in their 2019-2020 season.  ​

That jazzy rhythm you hear in each of the three sections is called syncopation.
​What does this music make you think of?​ 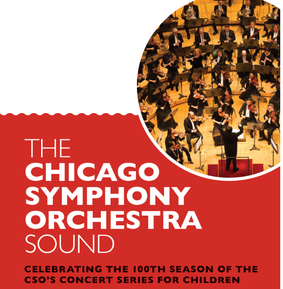 A new musical genre--the tone poem--was created in 1889 when Strauss composed Don Juan.  Before this, composers stayed within existing classical forms and fit the stories within these structures.  Strauss, instead, allowed the story to determine the design of the music.

At our concert the orchestra will be playing the last part of this piece (at 14:20 in this video). Throughout the tone poem Don Juan is searching for the perfect mate.  Listen to the end--do you think he finds her?