Ballet of the Chicks in their Shells

The inspiration for this music was Hartmann's costume design for a ballet.  You'll find a listening guide here or  use some simple percussion instruments to  play along.
​You might also enjoy visual artists Tom Scott's and Natasha Turovsky's animated interpretations of this music.

Looking at the picture, do you expect the music will be light or heavy?  Will the tempo be fast or slow?  What instruments would you choose for this music if you were Ravel? Now watch and listen to the recording.  Were you right? 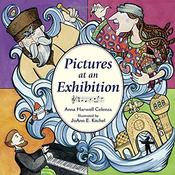 The museum visitor now becomes a part of the paintings as Catacombs seamlessly moves into this variation of the Promenade theme .

Compare this version of the Promenade with the first one.  How does the music make you feel?   What might the visitor be thinking about?  What musical tools did the composer use to make you think or feel this way?

The music for this water color drawing is impressionistic, mirroring the style of the picture.  It has a wandering melody, much dissonance and no clear structure.  Hartmann is one of the figures in the painting, accompanied by an architect and the guide holding a lamp.

Listen to this music with your eyes shut.  What affect do Mussorgsky's and Ravel's musical choices have on the way you feel as you listen?  Now open your eyes and view photos of the Catacombs of Paris as you hear the music.  How well do you think the music fits the actual setting?

The Negaunee Music Institute of the Chicago Symphony Orchestra  provided a Teacher's Guide for their 2019 Children's Concert based on this wonderful piece.

Hartmann's painting for this piece also no longer exists but we know that bydlo is Polish for cattle and in this case an ox and cart.  If you've never seen one, here is a one as painted by Vincent Van Gogh who lived during the same time as Hartmann and Mussorgsky.

Before you listen to this piece, predict what you think it will sound like.  Will it be fast or slow, high or low?  After listening answer this questions:  What did the composer do musically to tell us that the ox and cart were far from us, lumbered right in front of us, and then moved down the road?

Although there were around 400 works by Viktor Hartmann displayed at the exhibition Mussorgsky attended, only about sixty still exist.  Gnomus is not one of them.  We know that this was a picture of a Christmas ornament depicting a gnome-like nutcracker because Vladimir Stassov, a friend of Hartmann and Mussorgsky wrote brief descriptions of each of the paintings “illustrated” by Mussorgsky’s music.

A gnome is a mythical dwarf-like creature usually depicted as guarding treasure underground.  While listening to this music, imagine what Mussorgsky saw in the painting.  What is it about the music that helps you to visualize this? (You might use this guide  to help you explain.) This music inspires the imagination! Take a look at this idea by Andy Lyon or Tom Scott. 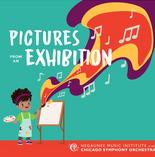 Thank you for contacting us! If needed, you will hear back within 48-72 hours.

In 1874, when composer Modest Mussorgsky visited an art exhibition in honor of his friend Viktor Hartmann, who had unexpectedly died a few months earlier, he had the opportunity to reflect on his artist friend’s life and work. As Modest walked from picture to picture, he was inspired to compose a piece of music that would tell stories about the artwork as well as his experience of attending the exhibition. His response to that visit was a suite for piano that provided not only a lasting testament to his grief—and ultimately, acceptance—for the loss of his friend, but an enduring representation of Hartmann’s art as only a few of those works still exist. Pictures at an Exhibition was not published until after Mussorgsky’s death but since then, has been remixed for orchestra by many different composers over the years. Maurice Ravel’s orchestration, created in 1922, is the best known.

The original titles for these two pencil drawings were “A Rich Jew in a Fur Hat” and “A Poor Jew.” Mussorgsky left this movement untitled and Vladimir Staassov inadvertently referenced a different painting when he added this title to the piece.  Interestingly, these drawings were a gift to Mussorgsky from Hartmann which Mussorgsky allowed to be included in the exhibition honoring his artist friend.

Compare the drawings.  How does the artist visually distinguish between the rich and poor man?  Now listen to the music.  How does the composer represent each of these characters?  Imagine they are having a conversation.  How do you think it ends?

Both the artist Hartmann and composer Mussorgsky were Russian and inspired by Russian folklore.  In this folktale the witch, Baba Yaga, lives in a house that can move from place to place looking for children to eat.  She travels in a mortar using the pestle rather than a broom to guide. Hartmann draws us her house and Mussorgsky tells us her story.

You'll find a listening guide for this music here. As you follow along notice how the first and last sections tell the story of the moving house while in the middle part the witch plays a frightening game of hide and seek with the children.

Pictures at an Exhibition by Anna Celenza shares the true story behind this composition in a child friendly and compelling way.

Other Classical Pages​ on MakeJoyfulSound.org
Ideas for BEETHOVEN'S SYMPHONIES

Ideas for RHAPSODY IN BLUE

Hartmann considered this work, which he had submitted for an architecture contest, his very best. It was intended as a memorial to Czar Alexander II of Russian who had escaped an assassination attempt in 1866.  You might say that Mussorgsky’s music is a memorial for his friend Viktor!

Play just the beginning of this piece.  Does it sound familiar?  That's right!  It's the Promenade back one last but now with a sense of reverence and celebration for a friendship that continues to inspire us today. 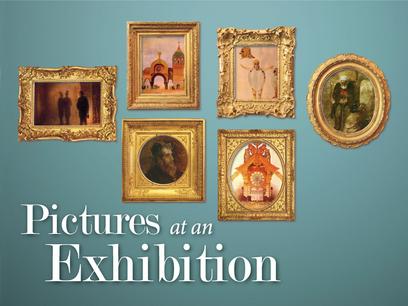 This site will soon add teaching ideas for the rest of the pieces from Pictures at an Exhibition:  The Old Castle, Tuileries,  The Market and the additional variations on the Promenade theme.

Another word for taking a walk in public is promenade and that’s the title of the first piece from Modest Mussorgsky’s Pictures at an Exhibition.  Maurice Ravel later orchestrated the original piano composition.

Pretend you are taking a silent walk through an art museum.  What pictures can you imagine you see?  If you'd like to follow along on a journey similar to Mussorgsky's, try this listening guide.